If you abase yourself, people respect you less because you behave in a way that shows that someone else has complete power over you.

When you are agitated by something, you are disturbed or troubled by it.

If you alleviate pain or suffering, you make it less intense or severe.

When you amend something, such as a document or your behavior, you fix it to improve it.

If you condole with someone, you express sympathy or sorrow, usually on the death of someone dear.

A convalescent person spends time resting to gain health and strength after a serious illness or operation.

When you enhance something, you improve it, make it better, or add to it in some way.

If something exacerbates a problem or bad situation, it makes it even worse.

When something impairs someone, it weakens, harms, or lessens them in some way.

When something incapacitates someone, it causes her to no longer be able to perform some function because she has been made incapable or unfit to perform it.

That which is irremediable cannot be cured or corrected, for it is beyond repair.

Something irreparable, such as damage, cannot be repaired or fixed in any way.

When an irreversible act is done, it cannot be undone or fixed in any way.

A panacea is something that people think will solve all problems and make everything better.

A pejorative word, phrase, or expression expresses a bad opinion of someone or something.

By finding a part-time job, Susan was able to ameliorate or improve her household’s poor financial situation. The knowledge that she would finally be able to afford food for her family ameliorated or relieved Susan’s sadness. Susan’s best friend Emily had helped ameliorate or relieve some of her financial distress when she had been unemployed: a friend in need is a friend indeed.

Quiz: Try again! What does it mean to ameliorate a bad situation?

Amelia's Test Overrated I have decided to rate Amelia's test an A instead of a D, which will certainly ameliorate her low grade, but perhaps will lower my professional self-esteem. 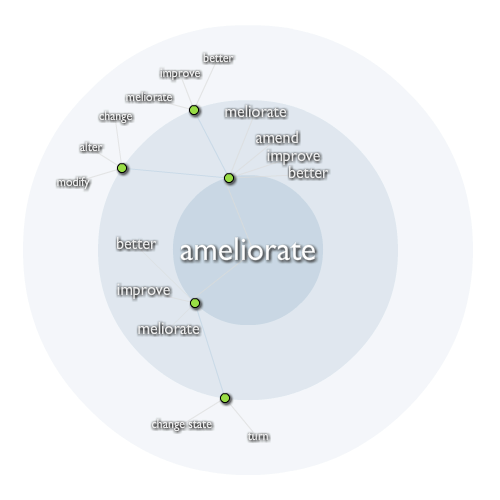