An authentic object or person is actual or real; it or they are not fake.

When the Catholic Church canonizes someone, they are officially declared a saint; by extension, canonizing a person is to treat them as nearly sacred, whereas canonizing a work of art is to place it in an accepted group of the very best of its kind.

A conjecture is a theory or guess that is based on information that is not certain or complete.

If you disabuse someone of an idea or notion, you persuade them that the idea is in fact untrue.

If you describe something as ersatz, you dislike it because it is artificial or fake—and is used in place of a higher quality item.

Something factitious is not genuine or natural; it is made to happen in a forced, artificial way.

A spurious statement is false because it is not based on sound thinking; therefore, it is not what it appears to be.

To be tentative is to be hesitant or uncertain about something.

Something that is veritable is authentic, actual, genuine, or without doubt.

When the Stuart family moved into their rich uncle’s crumbling mansion, local apocryphal rumors questionably claimed that it was haunted. While exploring the attic, Sam Stuart, the youngest son, remembered the fictitious and apocryphal stories told about the ghost when he thought he saw a shadow in a dark corner. Hair raised on end, Sam shared his story at dinner, yet another incident added to the collection of doubtful, apocryphal tales about the house spirit.

Quiz: Try again! What is an appropriate response to an apocryphal story?

The truth of an apocryphal tale or belief is “hidden away.” 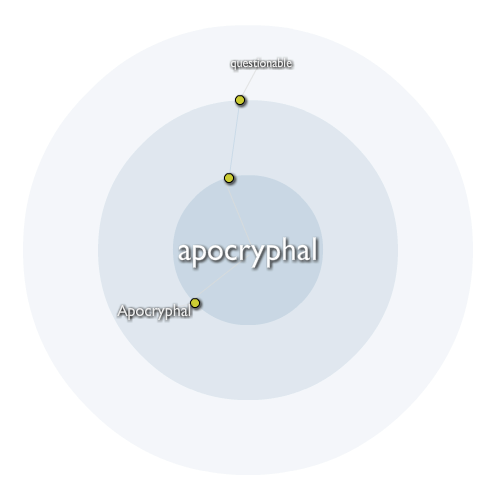