A chronic illness or pain is serious and lasts for a long time; a chronic problem is always happening or returning and is very difficult to solve.

Something that is diurnal happens on a daily basis.

When one is entrenched in something, one is firmly established, fixed, or placed in a position of great strength.

A fleeting moment lasts but a short time before it fades away.

Longevity is the life span of a person or object; it can also refer to a particularly long life.

Something that is perennial lasts a very long time and is enduring.

When you perpetuate something, you keep it going or continue it indefinitely.

A provisional measure is temporary or conditional until more permanent action is taken.

The brilliant, quickly disappearing sight of the fiery comet swiftly speeding across the night sky was fleeting and evanescent. One moment Aaron pointed the comet out to his brother, and the next moment the evanescent, short-lived wonder was gone. The brothers didn’t want to miss a moment of this heavenly beauty, so they watched eagerly until the evanescent flash vanished, leaving the sky dark once again.

Quiz: Try again! When actor Harrison Ford said, “The actor’s popularity is evanescent,” what did he likely mean?

Vanishing Scent When the wind comes along, the evanescent scent of the lilies fills my nostrils with a glorious but quickly vanishing scent as the wind soon dies down.

Something evanescent soon is “becoming thoroughly hollow, empty, or illusory” because of its very short-lived nature. 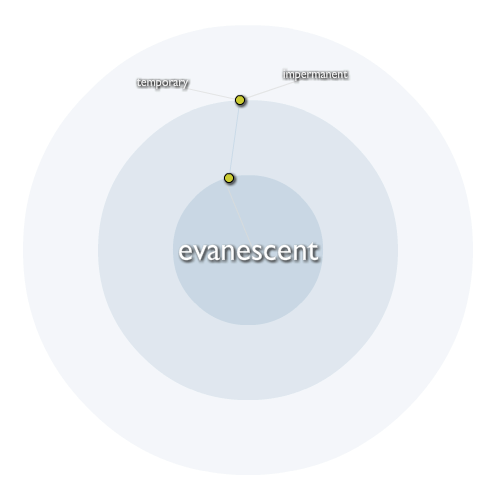