If you do something with alacrity, you do it eagerly and quickly.

If something moves or grows with celerity, it does so rapidly.

If something enervates you, it makes you very tired and weak—almost to the point of collapse.

A fervid person has strong feelings about something, such as a humanitarian cause; therefore, they are very sincere and enthusiastic about it.

Frenetic activity is done quickly with lots of energy but is also uncontrolled and disorganized; someone who is in a huge hurry often displays this type of behavior.

An indolent person is lazy.

When you saunter along, you are taking a stroll or slow walk from one place to another.

Someone who has a sedentary habit, job, or lifestyle spends a lot of time sitting down without moving or exercising often.

During the holidays, my mother became febrile; not only was she feverish, but was also filled with nervous and hectic energy. She never stopped moving, despite running a temperature; instead of resting, she went from one preparation to the next in a constant blur of febrile, feverish activity. When I offered to do some of the holiday cooking, she turned down my help and continued to scurry about the house in a highly excited, nervous, and febrile effort to make everything perfect. Unfortunately, the activity became too much for her, which caused her febrile temperature to peak at 105.

Quiz: Try again! In which of the following would you most likely read about a febrile person?

Fever-riled This worsening fever of his had him all riled up to the point where he was feeling fever-riled and febrile.

Febrile activity is so heated that it becomes like a “fever.” Notice that the letters “b” and “v” are often interchangeable. 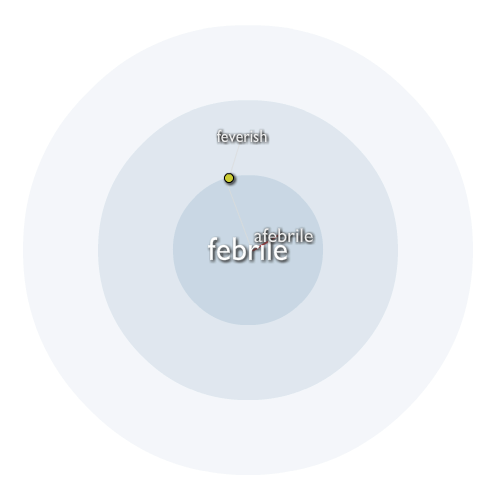