When you acknowledge the truth of something, you accept or admit it.

When you allege that someone has done something, you say or claim that they have done it without showing any proof.

An altercation is a noisy disagreement or heated argument.

When one thing belies a second, it hides the true situation, producing a false idea or impression about that second thing.

When you concur with another person, you agree with or have the same opinion as they do.

If someone will countenance something, they will approve, tolerate, or support it.

If you espouse an idea, principle, or belief, you support it wholeheartedly.

If you impugn someone’s motives or integrity, you say that they do not deserve to be trusted.

An irrefutable argument or statement cannot be proven wrong; therefore, it must be accepted because it is certain.

If you rebuff someone, you give an unfriendly answer to a suggestion or offer of help; you hastily turn that person away.

If you recant, you publicly announce that your once firmly held beliefs or statements were wrong and that you no longer agree with them.

If you repudiate something, you state that you do not accept or agree with it and no longer want to be connected with it in any way.

My mother is considered the top baker in our family, but when Aunt Sully visits she gainsays that widely held opinion by denying that Mom is the best. During a cake-baking contest, Sully gainsaid or went against the judge’s decision that Mom’s chocolate torte was the winner: Sully vocally voted for her own almond mousse cake instead. Unfortunately, my aunt embarrassed my mother by gainsaying or opposing the prize in front of everyone.

Quiz: Try again! What does it mean to gainsay something?

When you gainsay someone’s opinion, you “say” something “against” it. 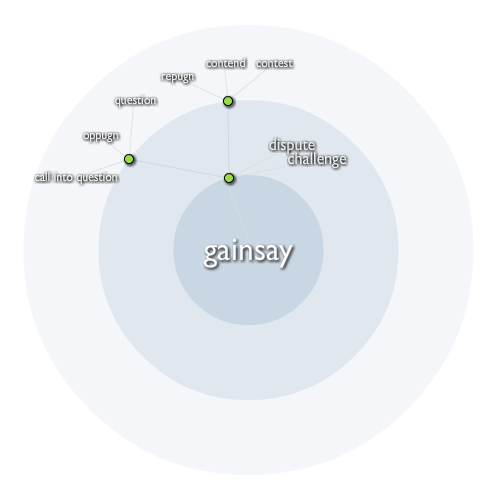