When you capitulate, you accept or agree to do something after having resisted doing so for a long time.

If you feel a compulsion to do something, you feel like you must do it.

If someone is implacable, they very stubbornly react to situations or the opinions of others because of strong feelings that make them unwilling to change their mind.

Something that is incessant continues on for a long time without stopping.

Something that is ineluctable is impossible to avoid or escape, however much you try.

Something that is inevitable will certainly occur because it cannot be avoided.

An intransigent person is stubborn; thus, they refuse to change their ideas or behavior, often in a way that seems unreasonable.

When an irreversible act is done, it cannot be undone or fixed in any way.

A reprieve is a temporary relief from or cancellation of a punishment; it can also be a relief from something, such as pain or trouble of some kind.

Quiz: Try again! What does it mean when something is inexorable?

Next? Adorable I Since my three sisters had already been married to various dukes and I was the next adorable daughter in line, it was inexorable that I would soon be married as well.

An inexorable event is “not able to be pleaded or spoken away,” that is, it will happen no matter what anyone “prays.” 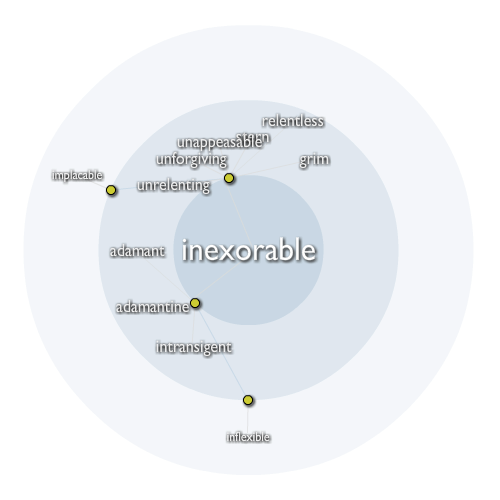