When you bequeath something, you hand it down to someone in a will or pass it on from one generation to the next.

When something is bestowed upon you—usually something valuable—you are given or presented it.

When you are granted a boon, you are given a special gift or favor that is of great benefit to you.

Deprivation is a state during which people lack something, especially adequate food and shelter; deprivation can also describe something being taken away from someone.

Someone who is destitute lives in extreme poverty and thus lacks the basic necessities of life.

An indigent person is very poor.

If you say that you’ve received a pittance, you mean that you received a small amount of something—and you know that you deserved more.

When you proffer something to someone, you offer it up or hold it out to them to take.

A supplicant is someone who humbly and respectfully asks for something from another who is powerful enough to grant the request.

The increasing homeless problem in the United States has led to more and more mendicants or beggars living their lives on the street. Did you know that the largest homeless shelter that feeds and houses mendicants or street people is located about three blocks from the White House? Mendicants, or those who ask for handouts on a daily basis, often live their entire lives not knowing for sure where their next dollar will come from, although most are well fed by soup kitchens.

Quiz: Try again! What is a mendicant?

Can't Mend A mendicant can't mend his financial life, and so he has to beg for money.

A mendicant is in “defective” or “wanting” circumstances. 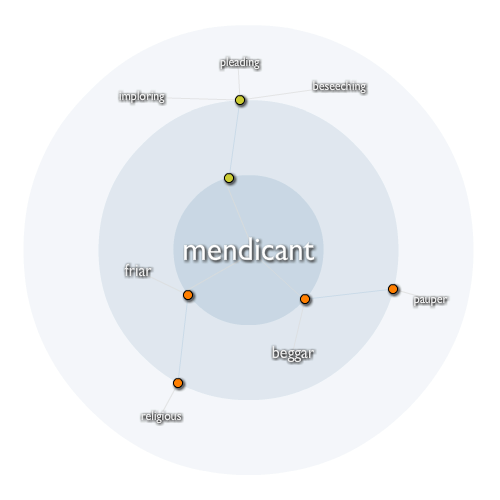