Something that is mottled is covered with spots or patches of different, random colors which are not in any particular pattern.

If you have a myriad of things, you have so many and such a great variety of them that it’s hard or impossible to keep track of or count them all.

A panoply is a large and impressive collection of people or things.

Something or someone that is protean is adaptable, variable, or changeable in nature.

A versatile person is skillful at doing many different things.

My multifarious or many and various health problems are keeping a whole collection of doctors busy. I am hooked up to multifarious, mixed machines that monitor many vital signs, such as heartbeat, blood pressure, kidney function—and even how many breaths I take in a minute. Despite the multifarious or numerous and diverse treatments advised by this large medical team, my health remains poor.

Quiz: Try again! When is something multifarious?

Multi-ferry Us On our recent cruise to the multiple Caribbean islands we had to board a different type of ferry for each segment. They had to multi-ferry us on our multifarious vacation.

Something multifarious is “of the nature of many” things. 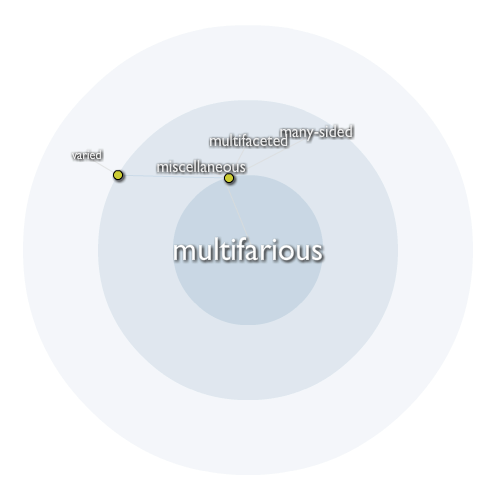