When you act in an aloof fashion towards others, you purposely do not participate in activities with them; instead, you remain distant and detached.

An antecedent of something, such as an event or organization, has happened or existed before it and can be similar to it.

When one event antedates another, it occurs before it in time.

A chronicle is a record of historical events that arranges those events in the correct order in which they happened.

A concerted effort is intensive and determined work that is performed by two people or more to complete a task.

Contiguous things are in contact with or near each other; contiguous events happen one right after the other without a break.

Two things that are convergent are meeting or coming together at one point in time or space.

When something ensues, it happens after or as a result of another event.

An entourage is a group of assistants, servants, and other people who tag along with an important person.

A nexus is a connection or a series of connections between a number of people, things, or ideas that often form the center of a system or situation.

A predecessor comes before someone else in a job or is an ancestor of someone.

The propinquity of a thing is its nearness in location, relationship, or similarity to another thing.

The proximity of one thing to another is their closeness or nearness to one another.

One thing that is subsequent to another is later than—or after it—in time.

A symbiotic relationship is one in which two organisms, organizations, or people intimately depend on each other, both acting to benefit the relationship.

Synergy is the extra energy or additional effectiveness gained when two groups or organizations combine their efforts instead of working separately.

Two synchronous developments were the invention of refrigeration and the completion of the railroad; because they happened at the same time, these two technologies were used together to great effect. The synchronous or simultaneous abilities of trains traveling across the country while their large refrigeration units kept food fresh changed the way people ate. Now a salad from California and green beans from Virginia could be eaten in synchronous fashion or at same time in New York City.

Quiz: Try again! What is an example of synchronous actions?

Synced Synchronous events are synced so that they occur at the same time.

Synchronous events occur “together in time.”

Greek: Agents of Change These young men jump at will and then jump synchronously ... but not for long. 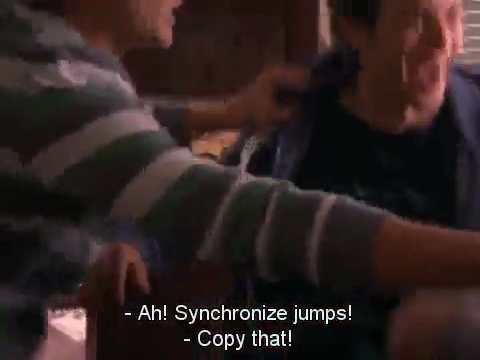 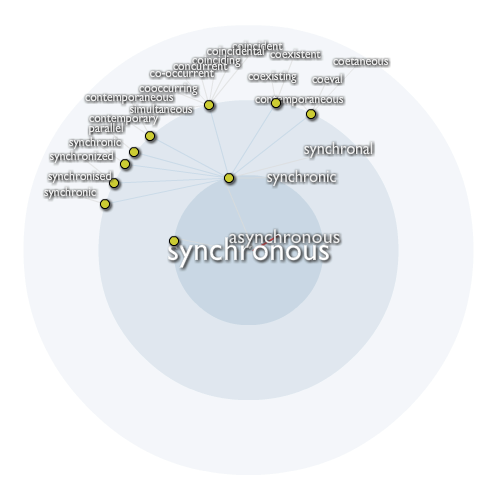