#30 Spelling Forms of the Prefix "In" 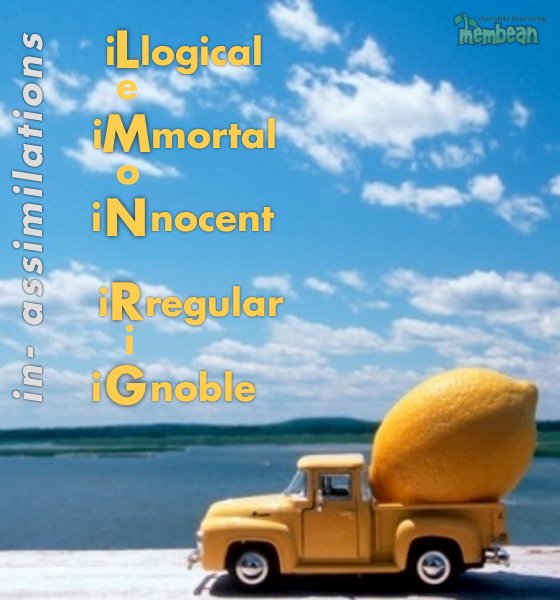 Prefixes often undergo spelling changes depending upon the stem to which they are affixed. The prefix in, for example, can exist in the following forms: il, im, in, ir, and ig. Examples of words containing such forms include illegal, imbibe, innate, irregular, and ignoble.

Anything immutable is “not capable of being changed.”

If a married couple has come to the point of irreconcilable differences, they are “not capable of being won over again” or “joined back” in agreement.

Different Spellings of the Prefix “In”

Today we will focus on the different spelling changes of the English prefix in, which means “in, on, or not.” Not only do prefixes usually have several different meanings, but they also change their form to accommodate the stem to which they are attached. These spelling changes of prefixes primarily occur to make a word easier to say. The prefix in, for example, can exist in the following forms: il, im, in, ir, and ig.

Take, for instance, the word “immutable.” Immutable consists of three morphemes: the prefix in-, the stem “mut,” and the suffix “-able.” Together they mean “not able to be changed.” Note that in has changed its spelling to im: it has undergone prefix assimilation so that the word is easier to say. Can you hear why “immutable” is preferable to “inmutable?” Or why the word “irresistible,” or “not able to be resisted,” is preferable to “inresistible?”

Recalling that the prefix in can mean “in, on, or not,” let’s go through examples of the five forms “in” which in exists “in” English:

Il: Examples include: illegal: “not legal;” illogical: “not logical;” and illegible: “not able to be read.” Note how the il spelling is preferable to inlegal, inlogical, or inlegible! In only changes to il when it precedes a stem beginning with the letter “l.”

In: Examples include: innocent: “not guilty;” inculpate: “put the blame on;” and incisor: tooth that “cuts in.”

Ir: Examples include: irrational: “not rational;” irrigate: “put a supply of water on;” and irregular: “not regular.” In only becomes ir prior to a stem that begins with “r.”

Ig: Examples include: ignoble: “not noble;” ignore: “not pay heed to;” and ignominious: “not having a good name.” In changes to ig only before a stem beginning with “n.”

A good way to remember that in can be spelled as il, im, in, ir and ig is through the mnemonic “LeMoN RiG!” If you are driving a big RiG carrying LeMoNade, you would want lots of yummy LeMoNs “in” your LeMoN RiG!

The prefix in not only has three meanings: “in, on, or not,” but also has five ways it can be spelled: il, im, in, ir, and ig. Drive that around “in” your LeMoN RiG, and the decoding of English vocabulary will be like a Sunday drive “in” the country sipping LeMoNade!