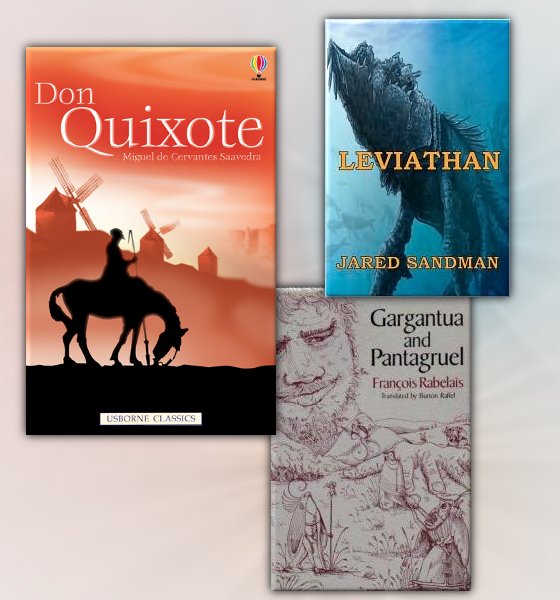 Words from which eponyms derive play a smaller role than Latin and Greek root words in forming English vocabulary, but nevertheless are important for learning the word origins of English vocabulary. An eponym is an English word that is derived from a name, such as that of a person or place. Today we will explore the eponyms quixotic, gargantuan, and leviathan.

The word gargantuan comes from the huge giant “Gargantua” in the book Gargantua and Pantagruel by the French author Francois Rabelais.

Someone who is quixotic acts “like Quixote.” From the famous character Don “Quixote,” who was known for his rather fanciful plans and idealistic exploits.

Some English words are not built up out of smaller root parts. Instead, an eponym is a word that is derived from a famous name or place. Learning the stories behind these words makes them memorable. Today’s eponym rootcast peeks into the rich stories behind quixotic, gargantuan, and leviathan.

Don Quixote, written by the Spanish novelist Miguel Cervantes, is arguably one of the funniest and best novels in all of literature. The main character, Don Quixote, from which derives the eponym quixotic, goes on impossible and unrealistic quests; for example, he attacks a huge windmill because he thinks it’s a giant, and searches endlessly for Dulcinea, his beloved who doesn’t even exist. Quixotic plans or ideas are impractical, being often based on unreasonable hopes and desires.

A giant from the book Gargantua and Pantagruel by the French author Francois Rabelais gave rise to an eponym as well, the word gargantuan, which has its origin in the huge giant Gargantua. Both Pantagruel and Gargantua were monstrous in size—the narrator at one time camped out for 6 months inside Pantagruel’s mouth! Gargantua is living large in the eponym gargantuan.

Speaking of things of immense size, our last eponym today comes from an enormous sea creature, the leviathan, referred to in the Book of Job. The leviathan was of such vast magnitude that clubs were merely pieces of straw to him, he caused the mighty to turn lily-livered when he roared, and he churned the depths of the sea as easily as we stir milk in coffee. The eponym leviathan describes something that is very large, powerful, difficult to control, and rather frightening.

I hope that such daunting eponyms as leviathan and gargantuan are not needed to describe your enemies during your life’s history, but also that some of the playfully quixotic wonders of life enter within the chronicles of your days.