#33 Eponyms and Their Stories 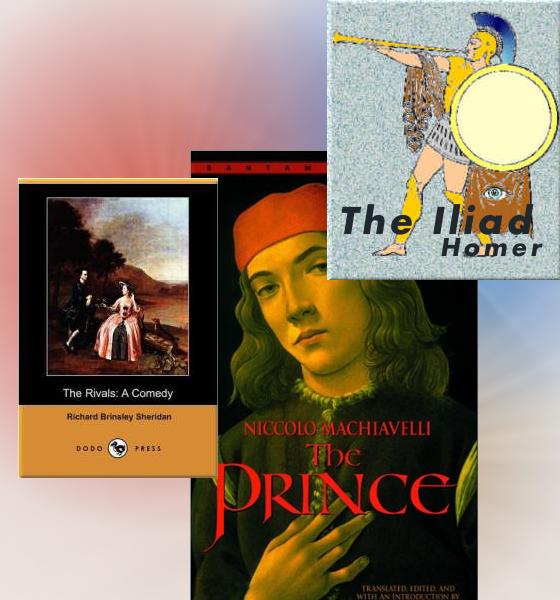 Words from which eponyms derive play a smaller role than Latin and Greek root words in forming English vocabulary, but nevertheless are important for learning the word origins of English vocabulary. An eponym is an English word that is derived from a name, such as that of a person or place. Today we will explore three eponyms from literature: malapropism, stentorian, and Machiavellian.

Stentor was the mighty herald in Homer’s Iliad, whose voice could carry over far distances; in fact, Stentor’s voice was said to be as loud as fifty men combined. Hence, stentorian is “characteristic of Stentor.”

The word Machiavellian derives from the author of the book The Prince, Niccolo “Machiavelli;” The Prince clearly states that a ruler may use any means necessary to retain power, no matter how evil and underhanded those methods may be, whereas his subjects are expected to remain morally upright.

Some English words are not comprised of root words; eponyms, for instance, are words derived from a famous name or place. Learning the stories behind these English words makes them memorable. Today’s rootcast illustrates three eponyms whose origins came from literature: malapropism, stentorian, and Machiavellian.

The eponym malapropism was coined from the character Mrs. Malaprop, found in Richard Brinsley Sheridan’s play The Rivals. Mrs. Malaprop often misuses words as she speaks, for example: “She’s as headstrong as an allegory on the banks of the Nile.” She, of course, should have used “alligator,” not “allegory!” Another example is when she says “He’s the very pineapple of success;” she meant “pinnacle of success!” Hence, the eponym malapropism was coined to describe an unintentional humorous mistake made when using a word that sounds similar to the word intended, but means something far different. Other examples of malapropisms include saying “a pigment of my imagination” instead of “a figment of my imagination;” “can’t is a contraption,” instead of “can’t is a contraction;” and Yogi Berra’s famous malapropism: “Texas has a lot of electrical votes” instead of “electoral” votes.

Our second eponym today, stentorian, derives from the herald Stentor in Homer’s Iliad. According to the Iliad, Stentor’s voice was so great that he could shout as loudly as fifty men together! It is easy to see how the eponym stentorian, which means “very loud,” came from the name “Stentor.”

Our last eponym, Machiavellian, comes from the author of the novel The Prince, Niccolo “Machiavelli.” A leading idea in The Prince states that a ruler may use any means necessary to retain power, no matter how evil and underhanded those methods may be. If you describe someone as Machiavellian, you are indicating that he uses clever tricks and other dishonest methods to achieve his aims, especially in politics.

Be careful not to use a malapropism, especially in a stentorian voice! And beware of those Machiavellian people in your life … those you may denounce in stentorian fashion!