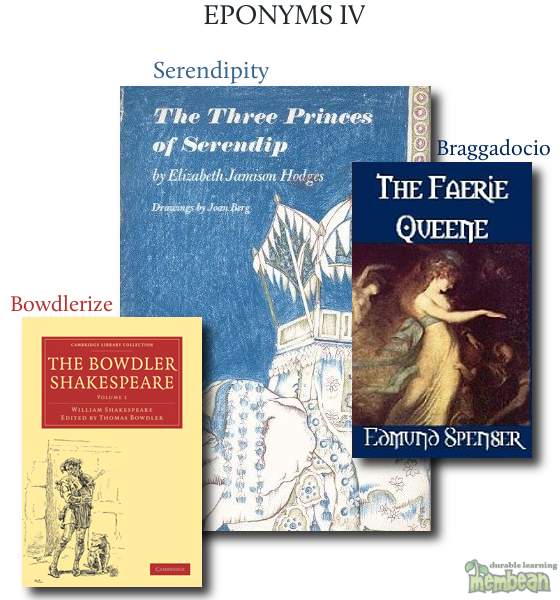 Eponyms play a smaller role than Latin and Greek root words in forming English vocabulary, but nevertheless are important for learning the word origins of English vocabulary. An eponym is an English word that is derived from a name, such as that of a person or place. Today we will explore three eponyms derived from the history of literature: serendipity, braggadocio, and bowdlerize.

The word bowdlerize was created from Thomas “Bowdler” who published a new Family Shakespeare in which he removed words he thought were inappropriate in Shakespeare’s original writings. This effort was much ridiculed and criticized.

Serendipity is the “state or quality of Serendip.” In the old Persian tale “The Three Princes of Serendip,” three heroes are described who make lucky discoveries.

An eponym is an English word that is derived from a name, such as that of a person or place. Today we will explore three eponyms from literary history: serendipity, braggadocio, and bowdlerize.

The eponym serendipity comes from an Old Persian fairy tale entitled The Three Princes of Serendip. In this tale, the three princes were always making lucky discoveries they weren’t looking for. The eponym serendipity, which means the good fortune that people unexpectedly encounter in finding or making interesting and valuable discoveries, is therefore clearly derived from the place name Serendip. Probably the best known example of scientific serendipity would be the serendipitous or accidental discovery of penicillin by Alexander Fleming from some mold growing in a petri dish.

The eponym braggadocio comes from a character created by the English poet Edmund Spenser, who wrote the epic poem The Faerie Queene. In that poem, the vain and proud character Braggadocchio is boastful to the extreme, constantly bragging about how great he was. Thus, the eponym braggadocio was formed, referring to someone who constantly and annoyingly tells others how great he is.

Our last eponym from literature today concerns a rather haughty man, Thomas Bowdler, who thought he could improve upon the immortal works of Shakespeare. Bowdler took it upon himself to cut out some of the lines that Shakespeare wrote because they did not meet his qualifications for “family values.” His new Family Shakespeare contained his rewritten versions that no longer contained supposedly inappropriate material. Hence, to bowdlerize a book, play, or other literary work is to remove parts of it that are considered by some to be indecent or offensive. Luckily this book was widely ridiculed, although is still worth a good laugh today.

Don’t needlessly bowdlerize the size of your vocabulary, but rather increase it to warrant a little well-deserved braggadocio … what one knows often serendipitously allows new leaps in knowledge!